Beware of the Danger Caused by Small Breaches 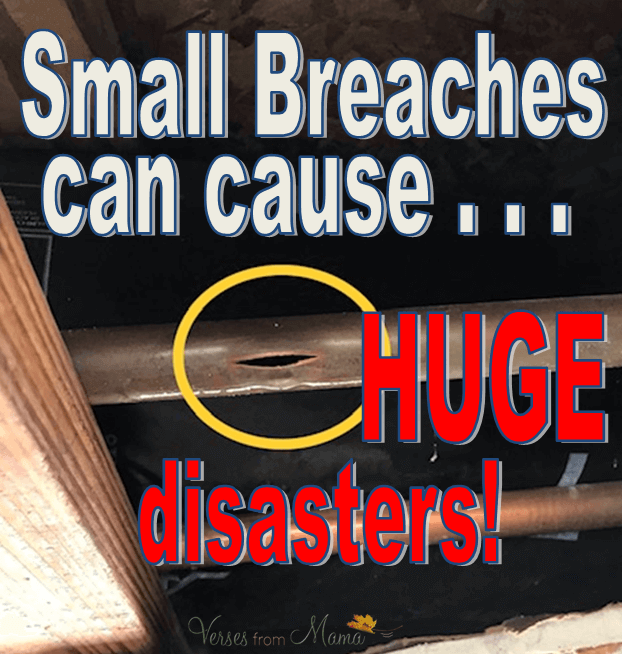 Beware of the Danger Caused by Small Breaches

Psalm 119:1 “Blessed are those whose ways are blameless, who walk according to the law of the LORD.”

I found out the other day how small breaches could result in huge disasters. 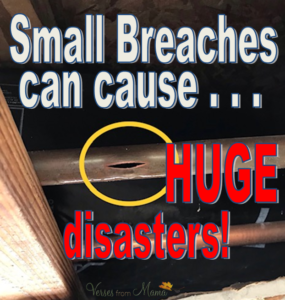 It was a mundane Monday evening and Abigail suggested we go out to eat for dinner to cheer things up. I had a gift card to Olive Garden I had been carrying around in my purse for quite some time, so I suggested we put it to use. Abigail met us at the office after play practice, and she, Nathan, Dad, and I piled into the van and headed to Beavercreek.

We had such a pleasant time lingering over Italian cuisine and good conversation that we hated to leave. After paying the bill the four of us drove back to the office where everyone got into his or her own car to head home. I arrived first and upon opening the door a huge shock met me. A fire hose-like spray of water pulsated from the kitchen ceiling onto the dining table where it splattered to all directions. The water spread throughout the whole room, leaving water everywhere.. There is no telling how long the flow had been gushing out of the burst pipe because when I ran to the basement to shut off the water valve I discovered that it, too, was filled with water.

This began a process over the next seventy-two hours of tearing down the ceiling, pulling up the linoleum, talking with contractors and insurance adjusters, and maneuvering around all the displaced furniture and pieces of our lives. The plumber showed me the tiny fissure in a copper pipe that had caused all the damage. Who would have thought that such a small breach would create such havoc and necessitate big time reconstruction of our kitchen?

We may be lulled into believing that we shouldn’t sweat the small stuff, but it is true that small things really do matter. Young men, in particular, may succumb to the temptation of a quick glance at some inappropriate images on the computer. But these seemingly small indiscretions have the potential of exploding into a full-blown addiction to pornography.

Others have had their marriages devastated by accepting what they considered harmless “friend requests” on social media. A random text here or there to someone other than your wife can lead to wrong emotional bonding, marital discord, and possibly even divorce. One too many drinks of alcohol, a slip of the tongue, a wandering eye . . . all of these have the potential for devastating results in your witness for Christ, your relationships, and your integrity.

God’s word gives wise advice. “Blessed are those whose ways are blameless, who walk according to the law of the Lord.” Those who follow God’s instructions and pay attention to even the small things are blessed. Obedience to God and immediate confession of any violation in your thoughts and actions can help you bypass a whole lot of mess and devastation.

The plumbers fixed our pipe, but the mess was already there. We have many weeks of reconstruction ahead, but we can fix the kitchen. The devastation caused by lapses in our thought life and behaviors are not always so easily remedied.

So, my sons, take great strides to keep your thought life and your actions pure. Let our kitchen be your reminder that even the smallest of breaches can cause big disasters. But those whose ways are blameless are blessed.