God’s Faithfulness to His Promises

God’s Faithfulness to His Promises

Most people have been on the receiving end of injustice at least once in their lives. You were passed over for a job you deserved. The other guy got the raise and you didn’t. Someone else got credit for your hard work. You were ignored instead of welcomed. This kind of unfairness crushes our spirit, but we have a God who sees all. And even when you have been wronged it doesn’t annul His promises. He is faithful and will work out His plan for your life in the end.

I sat among a group of friends as they discussed one of a young girl’s favorite topics – horses. I listened quietly as one of the older girls confidently shared all her experiential knowledge of the whims and ways of this elegant creature. The other girls periodically chimed in with additional information and pointers on the correct etiquette for riding, grooming, and feeding.

My self-esteem melted into a puddle under the heat of their disparaging looks. Although I longed to enter this conversation I couldn’t because I had no experience whatsoever. They knew it and told me so. After all, they had each been to summer riding camp and had taken a few trail rides, thus their deep understanding of the equine species.

It wasn’t fair but it was normal. All throughout the ages, self-centered people have trampled over others trying to highlight their importance or snatch what’s best for themselves. It even happened with God’s man, Abram!

After leaving Egypt Abram and his nephew, Lot, ran into a problem. They both had so much livestock that they needed to expand the pasture ground. In order to squelch the bickering field hands, Abram suggested that they split up, and he gave Lot first choice of the land. Lot carefully surveyed the surrounding acreage and his eyes landed on the luscious, green fields of the Jordan Valley. Without any thought of Abram’s welfare he made his choice. He would drive his flocks to the best land, leaving Abram with the dregs.

Didn’t Lot remember how Abram had cared for him when his own father died? Didn’t he realize that all of his wealth likely came from his connection to his Uncle Abram? Apparently not! He rounded up his livestock and headed east towards the prosperous city of Sodom, leaving his uncle to fend for himself on the goat and sheep cropped ground.

I love what happens next. After Lot disappears in a swirl of dust the LORD shows up and says to Abram, “Now lift up your eyes and look from the place where you are, northward and southward and eastward and westward; for all the land which you see, I will give it to you and to your descendants forever.”

God promised Abram the land long before Lot’s greedy choice and no selfish decision would interfere with His design. While Abram stood pondering his situation, the Lord showed up and reaffirmed His promise. So Abram set aside any bitterness he could have easily felt, set up his tent under some great oak trees, and again built an altar to the LORD. He believed God’s promise and was sure that God would make things right. His faith brought him peace in a difficult situation.

No One Can Thwart God’s Plans 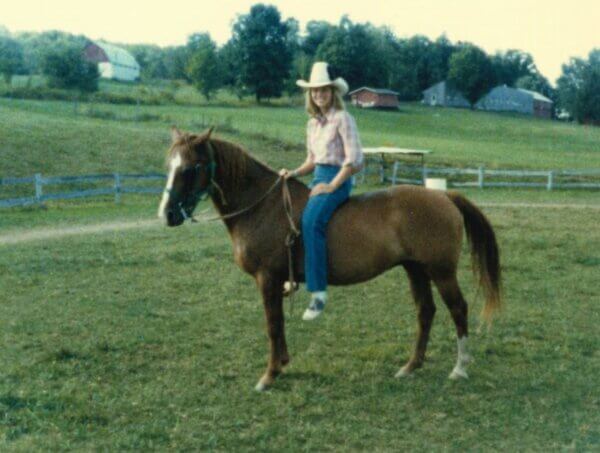 Don’t be surprised if you also experience injustice in the course of your life. But when you do, rely on the Lord to fulfill His plans for you despite the interference of others. He encouraged and reaffirmed His promise to Abram in the midst of a difficult circumstance, and in time brought everything He had promised to pass.

He also saw the broken heart of a little horse-loving girl who felt ostracized for her lack of knowledge and experience. And a few years later I believe He laughed out loud at her joy when He gave her the opportunity of a lifetime – spending every waking moment of five consecutive summers giving the horse back riding lessons and leading the trail rides at a small Christian camp in Northeast Pennsylvania.

Injustices. We will all experience them. But the Lord sees all. So turn to Him in faith when you are left hurt and choking in the dust of another’s self-centered pride. Remember that nothing and no one can interfere with His plans for your life because He always keeps His promises.

Read Genesis 13 for more on God’s faithfulness to Abram despite injustice.

For more on God’s faithfulness read:

A Victorious Ending and God’s Faithfulness